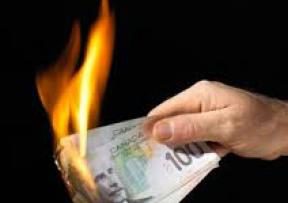 EDITOR’S NOTE: In the Times Colonist story (Nov. 5, 2021) ‘View Royal Council could add two seats“, it’s reported following public push back an expansion of council was rejected in 2002.
Political inflation would add costs during a pandemic
As if 91 local politicians aren’t enough to govern 425,000 citizens on the South Island, View Royal is considering adding two additional councillors.
At an open house on Nov. 15 a maximum of 35 people – the pandemic capacity of town hall – residents will discuss the issue in-person. Then again the next day at council or via webcast. Since incorporation the town of about 11,800 has been governed by four councillors and a mayor.
“Is a bigger View Royal council better?” asks John Treleaven, chair of Grumpy Taxpayer$. “Is there more of a profound question to be answered?”
“Just prior to incorporating in 1988, the merging of View Royal with Esquimalt was entertained but turned down by residents. This is an option that should be considered once again, since taxpayers are struggling with an escalating cost of living and unaffordable housing.”
Efficiencies and controlling costs should be a priority for council, not adding to them, Treleaven says.
A representative house in View Royal paid property taxes and charges of $3,961 last year, according to the province’s 2021 Schedule 704, Municipal Tax Rates and Burden.
Current budget challenges include sharply escalating RCMP costs as a result of a new union, and sharply decreasing casino revenues as a result of the recent economic downturn.
If View Royal council is to bring in a bylaw it must be made at least six months before the next general local election this fall and becomes effective for that election.
“Is this initiative being fast-tracked without full conversation with the taxpayers?” asks Treleaven. There are pros and cons to increasing council size, it’s an unknown process, and there are increased costs to the taxpayer, he says.
There is a one-time cost of $50,000 for changes to the council chambers to make the necessary changes to council with an estimated annual budgetary increase of $44,300.
The South Island has 17 jurisdictions – including 13 municipalities, three electoral districts, and one CRD – multiple police, fire and other services, all administered by 91 local politicians.
READ MORE
Council size open house Nov. 15, Town of View Royal, Nov. 2021.
FAQs, Town of View Royal, Nov. 2021.
Council size and public engagement. 29-Page Staff Report, Town of View Royal, Nov. 2021.